Arthur is my uncle – my Mother’s kid brother. He was named after my Grandma’s brother, Charles Fry, who was killed in WW1.

Arthur was a very clever boy – he questioned everything.  For instance, as a child he didn’t see the point of people undressing at night only to have to dress again in the morning.  His mother suggested he go to bed fully clothed … he was so uncomfortable that night that he never questioned it again.

He also decided to experiment with a pea seed by sticking it up his nose.  He must have lost it as it stayed there for some time.  It was only discovered by his mother when he started to snore.  On checking, she discovered  the pea, which has started to sprout. He went to Shedfield School then won a scholarship to Prices School, Fareham.  He achieved high passes in several ‘A’ levels and one of his great loves was photography. He left many photos of his family and friends for future generations to enjoy.

On leaving school on 28th July 1937, 16½ year old Arthur saw an advert in the paper – the RAF were advertising for Wages Clerks.  He was accepted and started his training with the 48th Entry between 1937-1939. He worked for the RAF until the outbreak of WWII when male Clerks were replaced by female.  On 18th June 1940, it was recommended that Arthur train as a pilot.  On 28th October 1940, Arthur began training at Cambridge. Arthur and some of the other Apprentice Clerks put their money together and bought the car shown here

His mother was quite surprised when he mentioned this while on leave. “But you can’t drive,” she said. Little did she know that he had learnt to drive while still at school. He had a part-time weekend job and helped a local market gardener from Shirrell Heath, Hampshire. When they delivered vegetables, the man let Arthur take the wheel. By the time he left school, he was a confident driver.

He quickly rose through the ranks from an AC2, to LAC, to Corporal and finally to a Flight Sergeant. On 4th September 1941 he was posted to Tangmere (No 1 Squadron) flying single-seater Hurricanes. 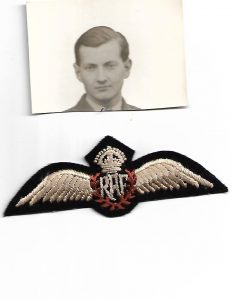 The Wings in the picture were given to me by my cousin, Richard Bouch, as Arthur’s sister, Grace (Richard’s mother), had them for safe keeping in South Africa where she made her home. The wings became the symbol of qualification worn by trained pilots.  When the Royal Air Force (RAF) was formed in 1918 the design was changed slightly. The wing shape took the form of an eagle and the monogram became RAF. The design of the flying badge was the first of its kind in the world. It has been used as the basis of pilot’s badges for the air forces of many countries

On 28th October 1941 his body was washed ashore in Criel Sur Mer, France.  Identification was made from his shirt which had his name, rank and number marked on it.  He was buried by the Germans.  After the war the, Red Cross exhumed his body and reburied him in the churchyard in Criel Sur Mer – Grave No 5. 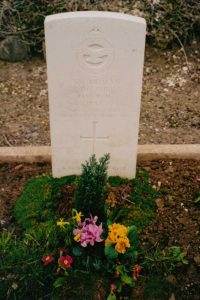 The War Grave Commission have never acknowledged that this is Arthur’s final resting place despite me having written to them and enclosing the Red Cross’s letter. As I now have a letter from the Air Ministry, I’m going to try again. 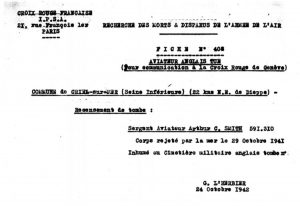 In 2019 I was sent this by Laurent Viton in France while they were studying some RAF crashes in their area. They came across airmen graves at Criel sur Mer, Normandy and Arthur was one of them:

It is not positively known which grave is Arthur’s but with the help of Laurent Viton and Andy Saunders, I’m hopeful that we can finally find a definite grave and have Arthur’s name engraved on it.

Arthur is on the War Memorial at Winchester Road, Shedfield, Nr Southampton. Grandchildren Georgia and  Sam Henry-Dobbyn place flowers there on Remembrance Sunday.