I was born in Wilmir, Twynhams Hill, Shirrell Heath, lived in Waltham Chase most of my adult life, and now live in Shedfield near to where I went to school, christened my children and buried some of those closest to me.

My family came to the Parish of Shedfield in the early 1900’s when my Great Uncle Charlie moved from Bramshaw in the New Forest to Shirrell Heath. He rented a property when he gained a position as cowman for Watson’s Dairy in Hospital Road, Shirrell Heath. When he was killed in WW1, my Grandmother, Ellen (Nellie) Smith nee Fry, moved into the cottage and shortly thereafter, gave birth to my mother, Miriam Chinn nee Smith.

Rumour has it that she was the first child to be born in the cottage.  Following Miriam’s birth, came more children – Arthur, Grace and Margaret Smith. At some point, Nellie must have bought Chase Cottage. 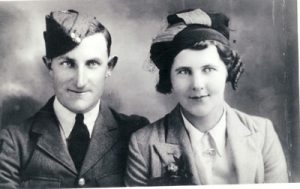 When my mother married William Boothby Chinn, they lived in a caravan at Pricketts Hill in Shedfield until the house at the bottom of Nelly Smith’s drive was auctioned, and Miriam and William bought it for £800. Later on they named it WilMir. They made this their home for the rest of their married life and set up their own market gardening business in the surrounding fields. This is where I was born and grew up, as were my siblings, Rosemary, Arthur and Barbara.

The picture taken in 2014 shows all four grandchildren and my sister, Rosemary’s, two grandchildren, Tilly and Josh.

My partner is Malcolm Seward . Out hobbies  are cars – mainly our AC Cobra, and travelling to Florida to see my son, Lee Henry, and family. 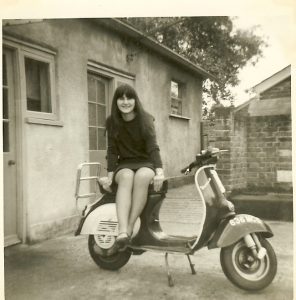 My first means of independent travel – a Vespa scoote 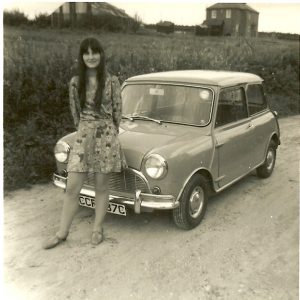 I learnt to drive in my Mum’s Mini 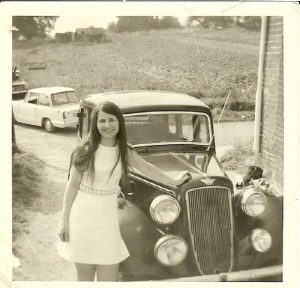 My first car in 1967: 1939 Austin 10 Cambridge with my yellow Triumph Herald in the background, my next acquisition. 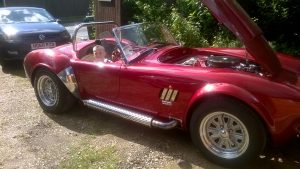 And now it’s a bit more up-to-date and great on sunny days – an A.C. Cobra

The purpose of this website is to remember our ancestors and the environment where we grew up so that my grandchildren know where their family came from.